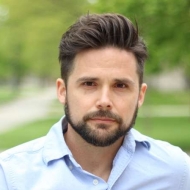 This user has not added any information to their profile yet.

Marc Devine is an Assistant Professor at North Dakota State University. He specializes in somatic movement, devising, Grotowski, Viewpoints, acting, vocal production, Roy Hart inspired Voice Work, and dialects. Marc’s research interests include Site-Specific Performance, Devised Theatre, the Synchronization of Mind-Body through Somatic Movement, and Performance Vulnerability. He co-authored the publication “Four Principles about Site-Specific Theatre: A Conversation on Architecture, Bodies, and Presence” appeared in Theatre Topics: Notes from the Field online edition in the spring of 2018, along with Rachel Bowditch, Chelsea Pace, and Daniel Bird Tobin.  He is the recipient of the Kennedy Center for the Performing Arts National Award of Distinguished Choreography/Movement Direction for his work on Ball State’s new musical ‘Mad World’ during the 2015 Kennedy Center American College Theater Festival.  Marc’s audio-book recording of ‘The Adventures of Huckleberry Finn’ has over one million chapter downloads, and was among the top 50 iTunes podcasts in the Arts and Literature category for over three years.  Marc has worked as a performing artist in various cities around the country, including Los Angeles, Santa Fe, San Francisco, Cincinnati and the Denver/Boulder Area for over the past 15 years.  Marc currently serves as the Treasurer for the Association of Theatre Movement Educators and is an active member of ATME, VASTA, and ATHE. He has an MFA in Contemporary Performance from Naropa University and a BFA in Acting from the College of Santa Fe.

The Association of Theatre Movement Educators brings its membership a world of information and opportunities.

ATME is a not-for-profit organization. ATME has a long-standing affiliation with the Association for Theatre in Higher Education (ATHE) and the annual ATHE conference.