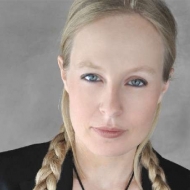 Rachel Bowditch is a theatre director, an Associate Professor and the Head of the MFA in Performance in the Herberger Institute for Design and the Arts at Arizona State University. Her areas of specialty are Lecoq, Rasaboxes, devising, site-specific theatre, immersive theatre, incorporating innovative technology into performance, festival, and utopian theory.

This user has not added any information to their profile yet.

Rachel Bowditch  (MA/Phd) is a theatre director, an Associate Professor and the Head of the MFA in Performance in the Herberger Institute for Design and the Arts at Arizona State University. She presents her research, scholarship, and artistic work nationally and internationally. Her unique international background growing up and living overseas for 18 years–Rome, Italy; Addis Ababa, Ethiopia; Jakarta, Indonesia, Singapore, London, and Paris during her formative years and her extensive international travels has deeply impacted her work as a theatre artist. She received her Masters degree and PhD in Performance Studies from New York University in 2006. Her studies at Skidmore College (1994-1998), the British American Drama Academy in London (BADA) (1996), Suzuki and Viewpoints with Anne Bogart and the SITI Company (1996), Dell’Arte School of Physical Theatre (1998), Ecole de Jacques Lecoq International School of Physical Theatre in Paris (1998-1999), and becoming a certified instructor in the rasaboxes actor training (2002-present) have helped her move toward achieving her vision of theater–theatre that is visceral, physical, visual, and dynamic dealing with challenging topics from addiction, suicide, insanity, execution, transnational relocation, and sustainable living in the desert among others.

Two main connecting research threads weave throughout her work: 1) Devising, immersive theatre, physical theatre, experimental and avant-garde performance, application of innovative digital technology in performance, and performance/movement pedagogy, and 2) Invented ritual practices and festivals as sites for utopic social transformation. Her book On the Edge of Utopia: Performance and Ritual at Burning Man (2010) was published by University of Chicago Press/Seagull Books. Her book Performing Utopia will be out later in 2017. She is currently working on two books under contract with Routledge about Richard Schechner’s performance workshop and rasaboxes with Paula Murray Cole and Michele Minnick and an edited anthology Physical Dramaturgy: Perspectives from the Field with Jeff Casazza and Annette Thornton.

Since 1996, as the Artistic Director of her theatre company Vessel, her mission is to explore innovative and inventive intersections between physical theatre, dance, circus, visual arts, and multi-media technology. From the street to the stage, her aim is to create a poetry of space that brings stories to life in dynamic, poignant, and visceral ways, creating a sense of intimacy and connection to her audiences.

Her ‘atmospheric’ site-specific works Transfix, Spectrum, Chrome, Equinox, Aurora, Sanctuary, and the Naiads have been presented with over 60 performers in over 50 venues and site-specific locations from Times Square, Grand Central, Central Park, Tompkins Square Park, Sedona, Arizona and Imperial Dunes, California among other sites. Vessel has been commissioned by Mesa Performing Arts Center’s Festival of Creativity (March 2012) and SPARK Festival (2013 and 2015), Scottsdale Public Art for The Art of Maintenance, Fish Herding on the Scottsdale Canal (January 2010), Spectrum: A Winter Solstice Sunset Ritual and Community Waterfall for the Soleri Bridge Dedication on December 10th and 11th, 2010, Spectrum for Canal Convergence (2012), INFLUX 3: Memory Room (2013)—a store-front multimedia performance installation about women, writing, and memory (Marshall Way, Scottsdale), and INFLUX 5/ASU Emerge 2015: Abraxa—a window performance installation about ideal utopian architectural blueprints at ASU Brickyard, Mill Avenue, Tempe, Still Life  and the opening of the Andy Warhol exhibit at the Phoenix Art Museum, and the opening of the I.D.E.A. Children’s Museum in Mesa (2014). Vessel’s Spectrum was featured on the cover of the Visit Mesa visitor’s guide (2014). In 2010, her retrospective at the Monorchid Gallery in Downtown Phoenix featured photographs by Chris Loomis, a live video remix of Transfix by Adam Cooper-Terán, live sound sculpture by Glenn Weyant, a live remix of T.S. Eliot’s The Wasteland by Logan Phillips, installation art by Saskia Jorda and Simon De Aguero, and the live performance of Transfix.

She recently directed a new play by José Cruz Gonzalez American Mariachi (a Denver Center commission) for an industry reading at the Colorado New Play Summit 2016 at the Denver Center. Bowditch received wide critical acclaim for her work directing Childsplay’s 2011 production of The Sun Serpent. With a $25,000 National Endowment for the Arts grant, she directed the world premiere of The Sun Serpent with Childsplay written by José Cruz González and composed by Daniel Valdez at the Tempe Center for the Arts in October 2011 and remounted at Mixed Blood in Minneapolis in 2014. The production was featured in American Theatre (January 2012) and TYA Today (2012). It received 11 Arizoni Award nominations and won 6 for Best Direction, Best Costume/Masks, Best Lighting, Best Sound, Best Set, and Best Overall Professional Production in 2011.

Recent original devised directing projects include: Shooting Columbus, an immersive site-specific performance examining the consequences of time travel and the current resistance of Native people in the face of continual oppression by the United States government produced by Borderlands Theatre in Tuscon, Arizona in March 2017. Created and devised by Fifth World Collective, a group of Indigenous and non-Indigenous artists from the state of Arizona, Rachel Bowditch (European American), Adam Cooper-Teran (Yaqui, Chicano), T Loving (Black, Cherokee), Ryan Pinto (Hopi, Omaha, Northern Ute), and Denise Uyehara (Okinawan and Japanese American), the show presented poetic imaginings of a radically different past to foster dialogue about a radically different future. A central question this project asked was, “How would your life be different if Christopher Columbus had been assassinated?" The project was funded by a national MAP Fund grant, a Network of Ensemble Theatres Grant, an Arizona Commission on the Arts grant and a Herberger Institute Faculty grant.

She also received a Herberger Faculty Project grant for The Conference of the Birds, an original adaptation of Farid ud-Din Attar’s 12the Century Sufi Poem--a  two-year devising project that culminated in a 6,000 square foot raw industrial space, the Unexpected Gallery in downtown Phoenix (February 2017). This immersive performance allowed the audience to move through seven unique environments as they followed the Hoopoe through the seven valleys of Attar's poem.

At ASU she has directed Sophie Treadwell’s Machinal, Naomi Iizuka’s Anon(ymous), Deborah Stein's Bone Portraits and The House of the Spirits (Caridad Svich based on the novel by Isabel Allende) on the Galvin Mainstage. Bone Portraits was voted as one of the best shows in Phoenix for 2009 for “Innovative Design and Staging” by the Arizona Republic. Her innovative use of multi-media in Caridad Svich’s The House of the Spirits was featured in Live Design (November 2014) and Sophie Treadwell’s Machinal and her original work The Ophelia Project were featured in Live Design (October 2008) and American Theatre (January  2009). Bowditch was named one of the 100 most creative people in Phoenix by Phoenix New Times in 2012. In November 2013, she directed Asylum, an immersive site-specific performance at the historic Ice House, the first immersive performance of its kind in Phoenix. Asylum was mentioned in the Arizona Republic’s “Best of 2014” as the “Best Arts Laboratory” in the Valley.

Prior to ASU, as an artistic associate of Richard Schechner’s 2nd New York-based theatre company East Coast Artists, she had a lead role in Yokastas (2003) and Yokastas Redux (2005) directed by Richard Schechner at LaMaMa Annex (reviewed by the New York Times, the Village Voice, and Time Out New York). As one of the six nationally certified rasaboxes instructors, she has studied and assisted in rasaboxes presentations and workshops with Schechner, Cole, and Minnick since 2002. As an education associate of RoseLee Goldberg’s Performa (author of Performance Art: From Futurism to the Present), she was the liaison between Performance Studies International at New York University and Performa Performance Art Biennial ‘07 in 2007 and worked with Performa for several years organizing Performa ’05 in New York City. She also has worked as an actor with award winning psychologist Paul Ekman (Author of Emotions Revealed) and was featured in his March 2005 National Geographic article on the mind.

During her sabbatical in 2016, she completed the month-long Dell’arte Bali Program where she studied Balinese dance, Kecak, Wayang Kulit, and mask carving with master mask maker, Nyoman Seitwan to continue her life-long obsession with masks and mask performance.

The Association of Theatre Movement Educators brings its membership a world of information and opportunities.

ATME is a not-for-profit organization. ATME has a long-standing affiliation with the Association for Theatre in Higher Education (ATHE) and the annual ATHE conference.